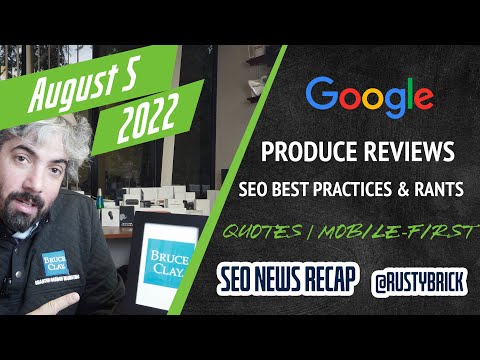 Shockingly, Google finished rolling out the Google product reviews update on August 2nd and didn’t even tell us on social. We are seeing some volatility and fluctuations in Google Search maybe due to the Google Product Reviews update starting late last Friday and the tools noticed it on Wednesday but that was after it was done rolling out. Google added new links to content guidelines, one of those guidelines was for best SEO practices for bloggers which was later removed. Google is still moving sites over to mobile-first indexing, over 5 and a half years later. Google Search Console temporarily suspended the validate fix feature during some classification changes. John Mueller from Google had a beautiful SEO rant, which some might not like. Google changed how it shows snippets for search results with quoted text. Google is testing “perspectives” in the search results. Google is testing site name and favicons for image results in web search. Google is loading a new people also ask in the footer. Google is also showing the view in 3D for some products again. Google Business Profiles is testing expandable menu for editing your listing. Google added Asian-owned attributes for Google Business Profiles. Discovery Ads now work with Google Ads Editor and Api and more.. Google has a new tag, called the Google Tag. Microsoft Advertising released a boat load of features including rolling out automative ads, new ad formats, more bidding options and more. Google’s secret algorithm may be exposed to Rumble due to a legal ruling. That was this past week in search at the Search Engine Roundtable.

Sponsored by Bruce Clay, one of the founding fathers of the SEO space, doing search marketing optimization since 1996. Bruce Clay is big into SEO training, check out seotraining.com to learn more and check them out at bruceclay.com.